Note: This extremely brief description of Korea’s ceramic styles is not intended to be complete nor is it intended to describe in detail the many multi-faceted approaches to each of the styles mentioned.  That would take literally volumes on each of these styles.  Rather it is intended to be a very quick look at these styles so that we might be able to distinguish one from the other.
1.  Silla Style:  Silla style is gray sometimes with flashes of fly ash glaze where the dust of flying ash from the wood firing has melted on the clay surface.  It is not glazed.  Silla style means that it is in the style that was being produced during the Silla Period 57BCE to 668 CE.  Korea’s climbing kilns reached temperatures high enough to melt the dust ash on the pieces during the firing.  Silla style’s gray color and sometimes brown comes from the final stages of the firing when the carbon created from the wood firing is driven into the clay body by adding pine branches and closing off the kiln causing it to be gray to brown depending on the amount of reduction.  Most fly ash that lands on the pot during these conditions turns black because of the carbon inducing process.  These examples of Silla Style were created by Park Byung Teak Intangible Cultural Asset.
Examples of Silla Style follow: 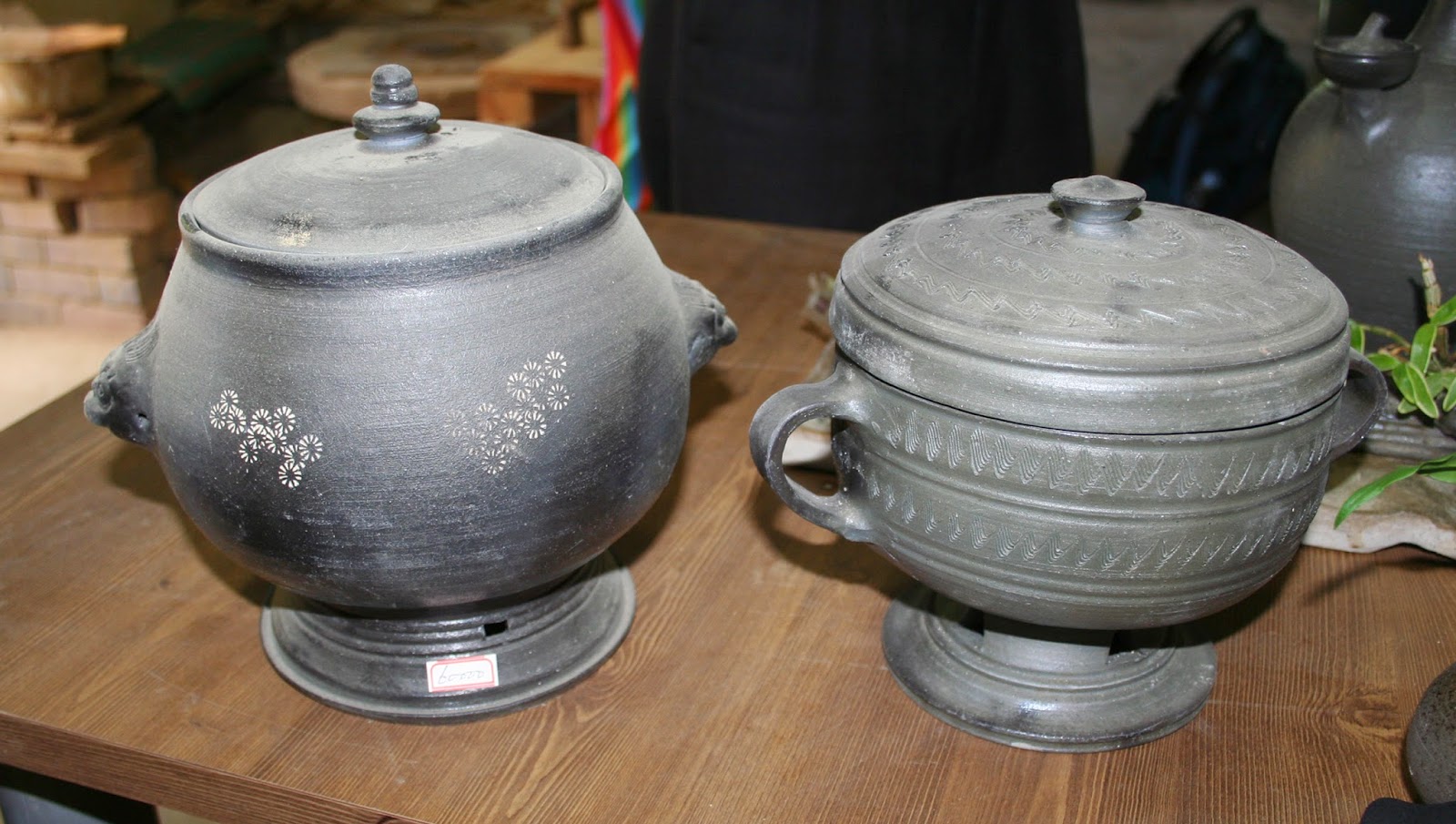 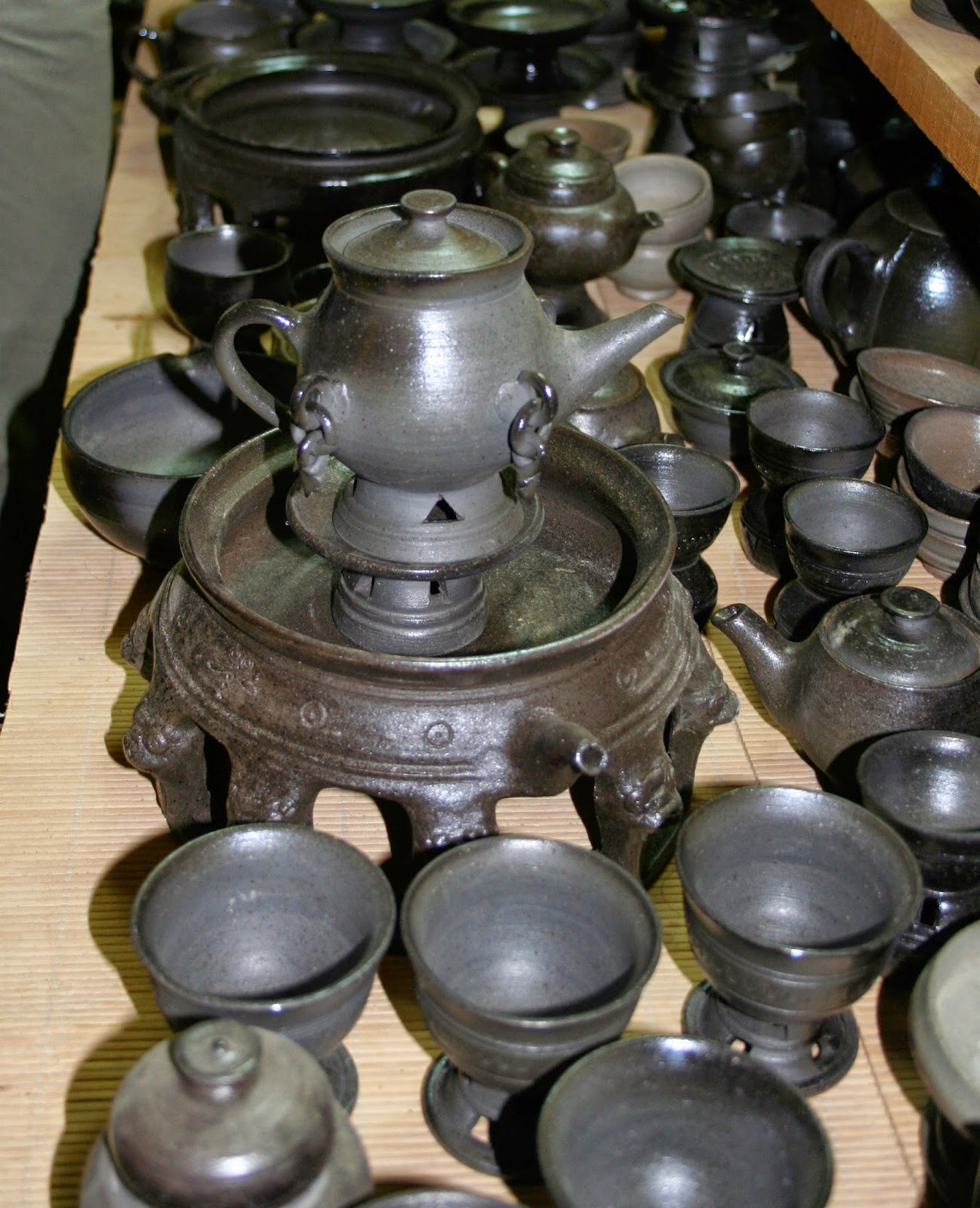 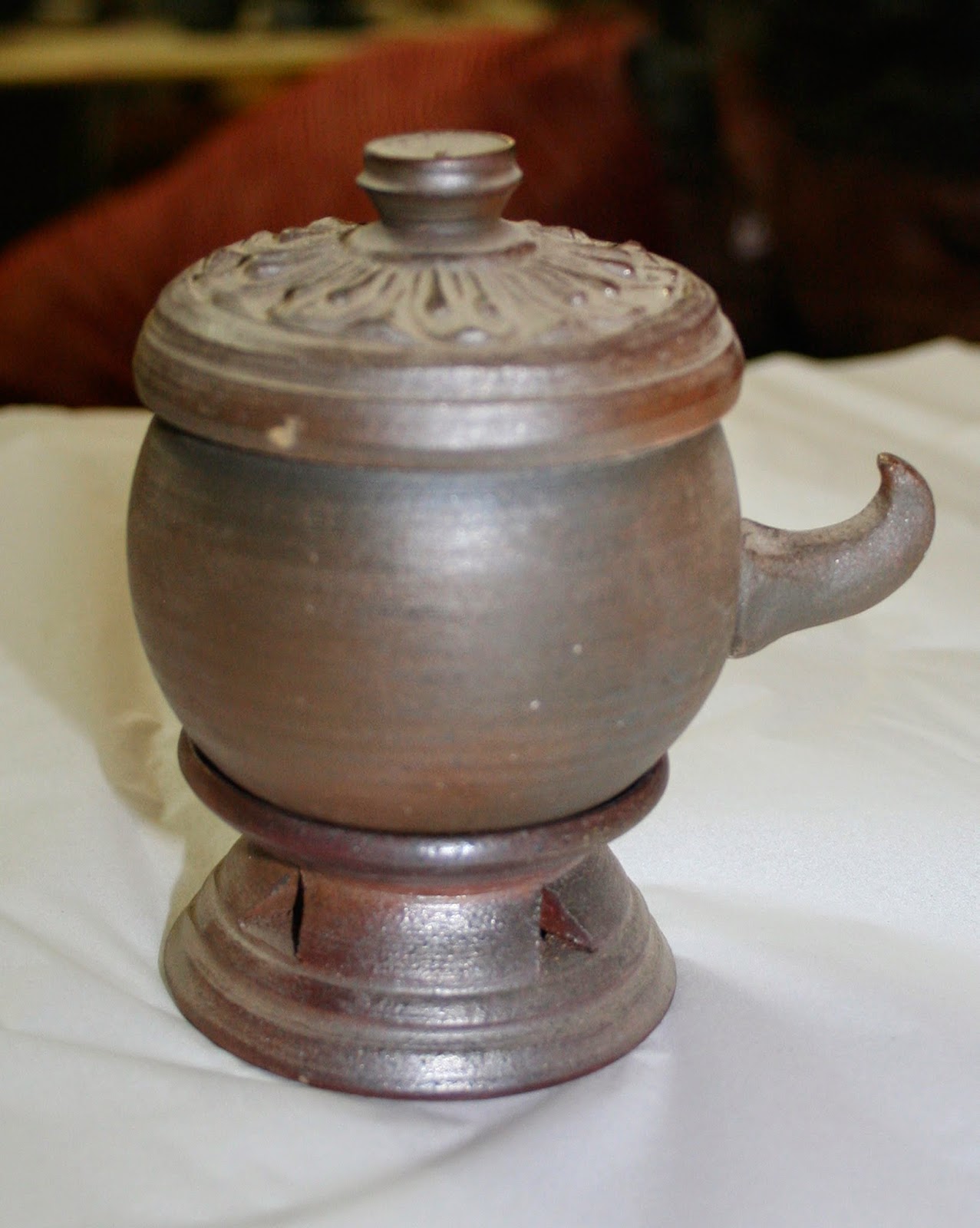 2.  Anagama:  Anagama is an off shoot of Silla style.  In this case the potter introduces greater amounts of wood to create more fly ash and thus more melted fly ash on the final piece. Typically anagama is unglazed ware that gains its glazes from the melting of fly-ash on the surface of the ware.  This fly ash glaze is most often tan or yellow in color because of sufficient oxygen in the kiln.  Most often Anagama Style is also more rugged and natural.  Although Anagama Style comes from the Silla style way of working it has developed its own identity.  These examples of Anagama Style are by Kim Dae Woong.  The tea set is a contemporary version employing some aspects of buncheong.
Examples of Anagama Style follow: 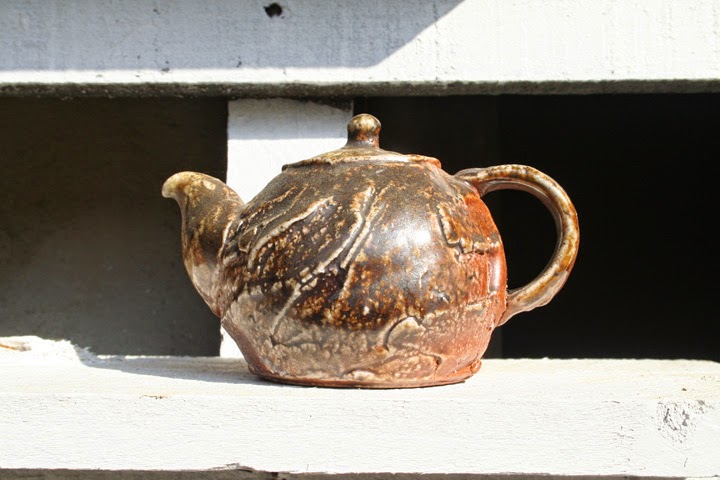 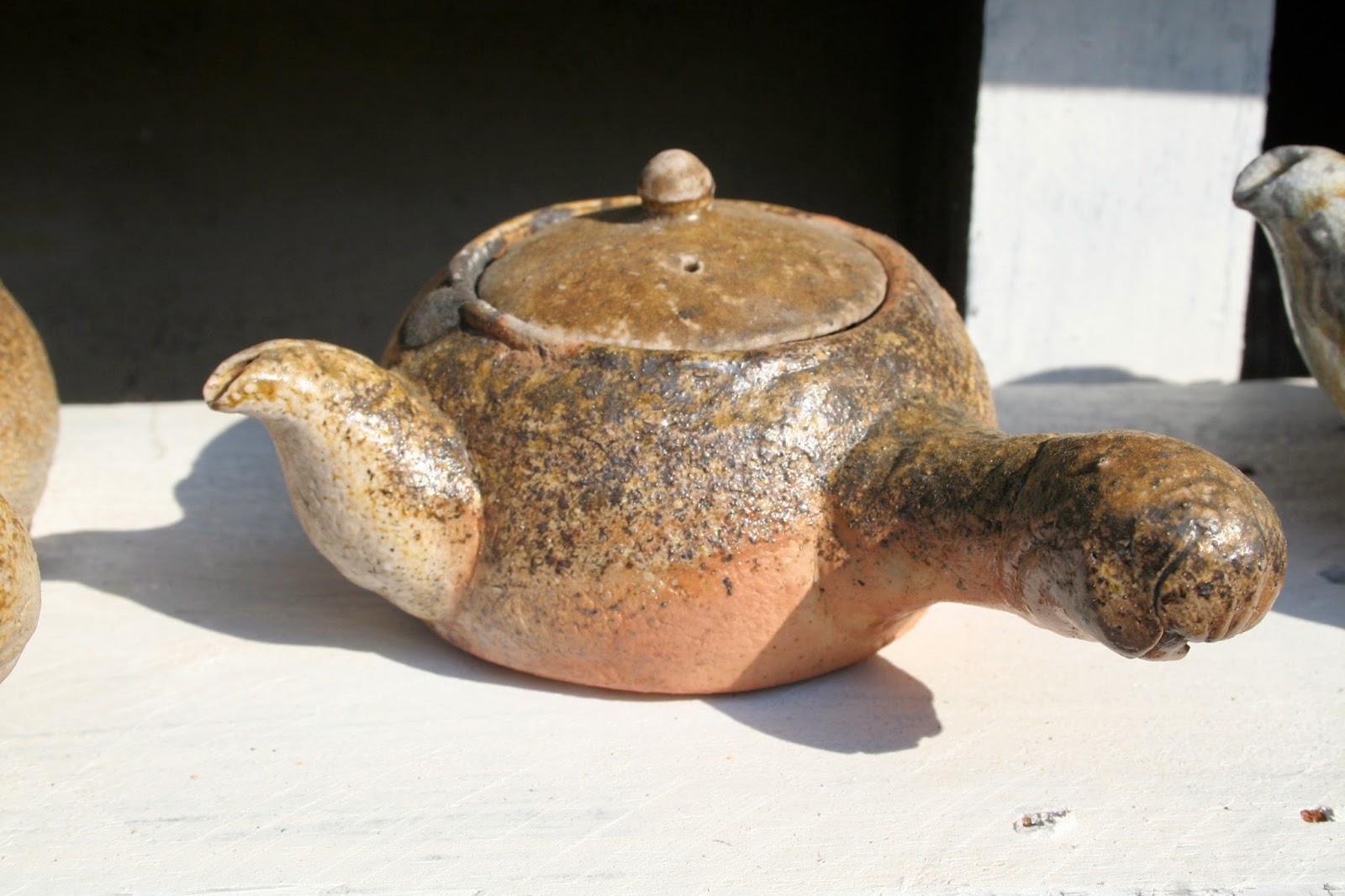 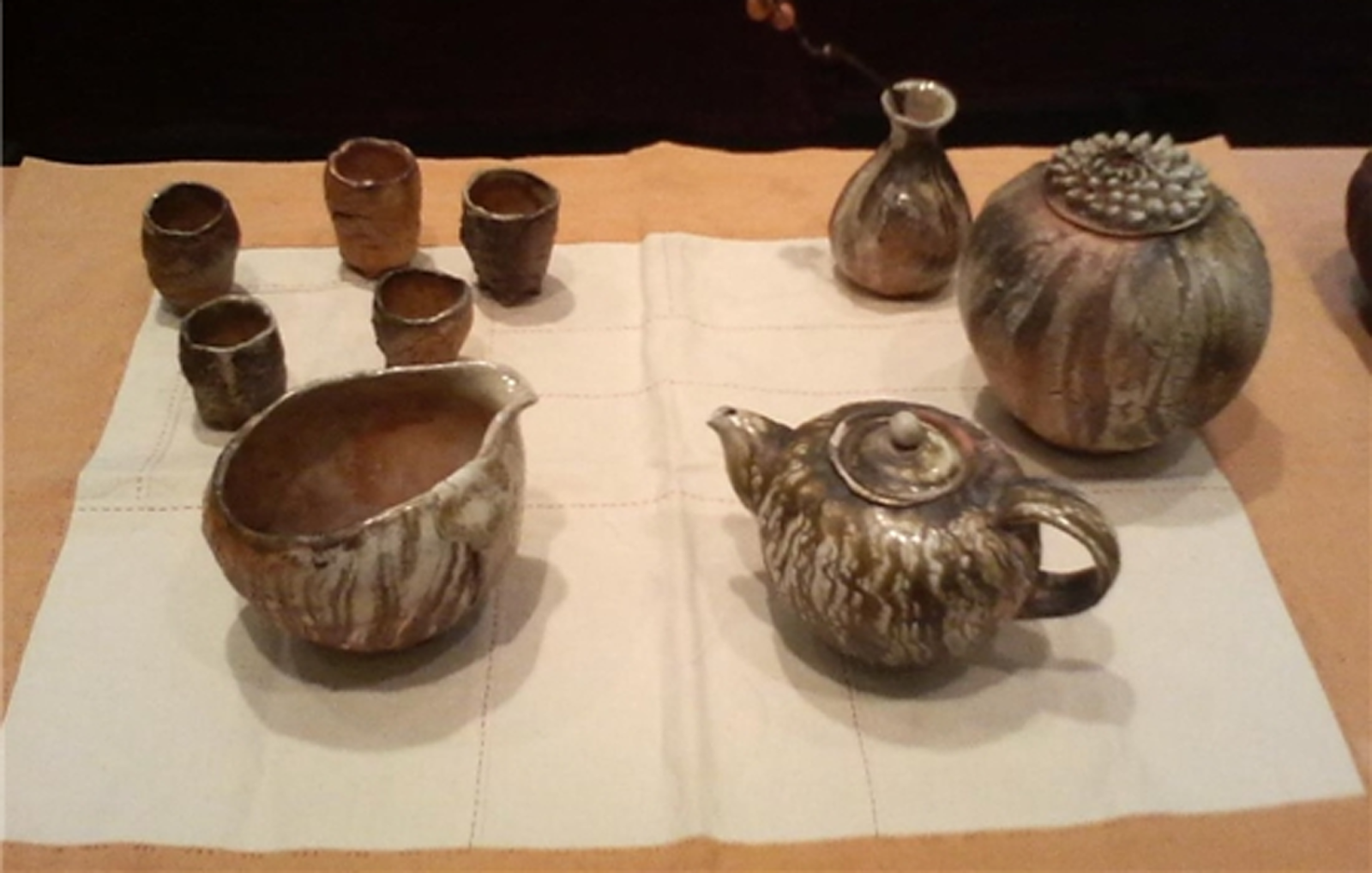 3.  Onggi:  Onggi ware is basically common ware used in the home as everyday ware.  It includes both many types of smaller utilitarian pieces and large, sometimes very large, storage jar.  Typically Onggi is glazed with a brown clay and ash based glaze of various shades.  These examples of Onggi Style are by the cultural treasure Lee Hak Soo.
Examples of Onggi Style follow: 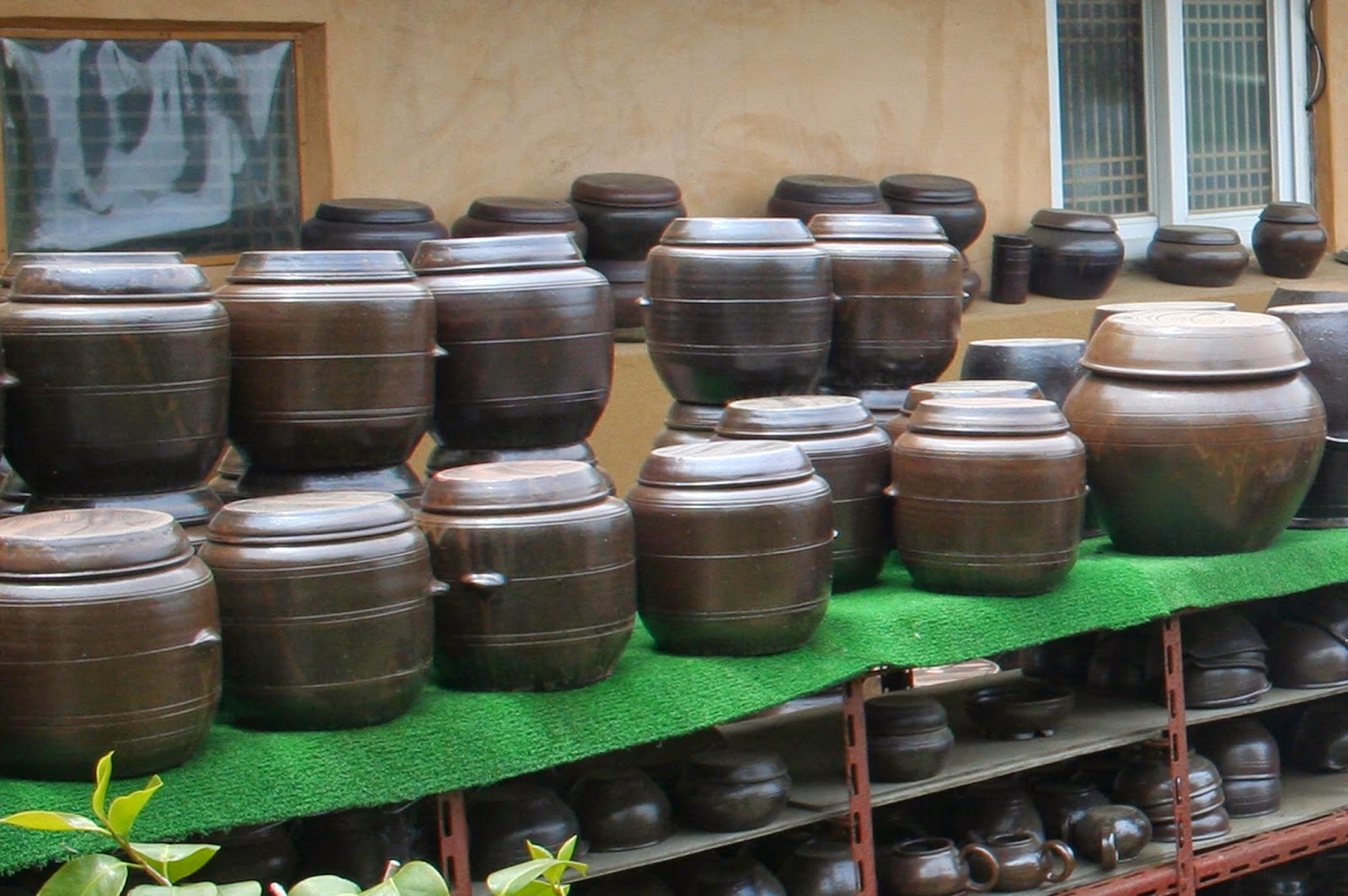 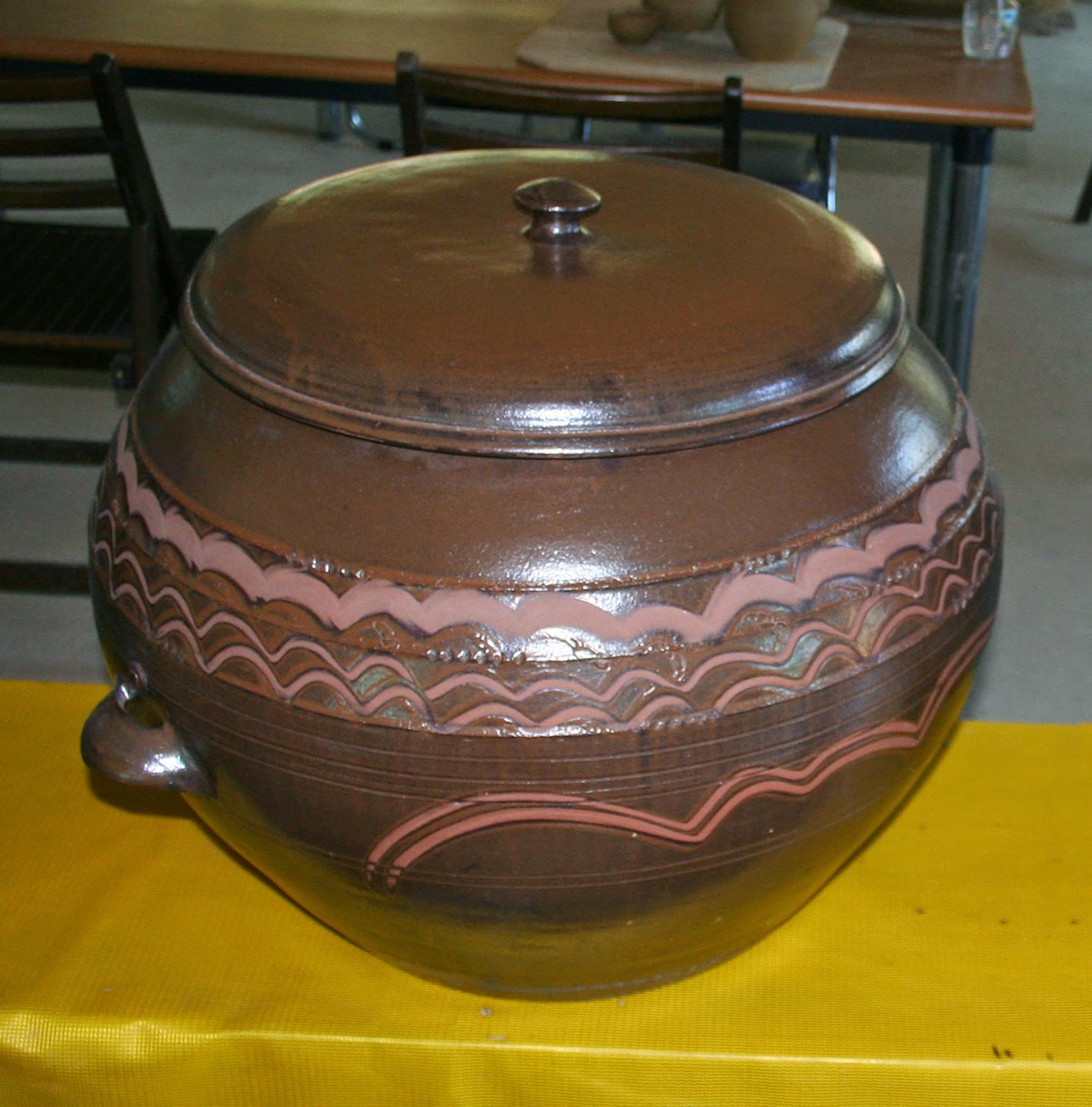 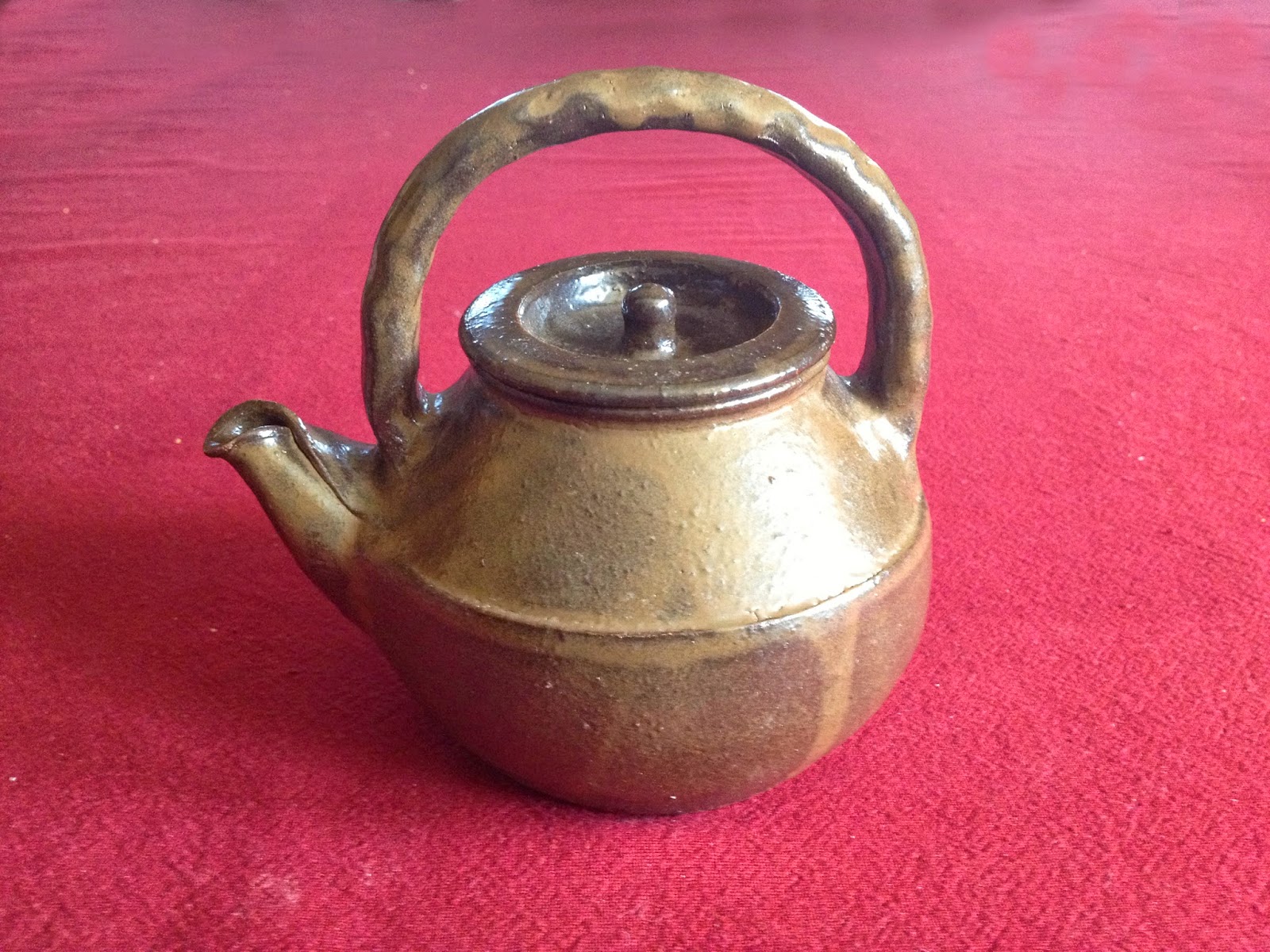 4.  Celadon: Celadon is best noted for two things, the gray green “celadon” color of the glaze and a number of decorating processes that were used and often developed in Korea.  Celadon is called ‘chungja’ in Korea.
These examples of Celadon are by (1) Kim Yu Sung, (2) Jong Ki Bong (3) Gangjin Celadon Center (4) Gangjin Celadon Center.  The four celadon pieces were selected to show a variety of color, decoration and style.  While some scholars suggest that (4) was a 'wine' ewer.  Contemporary thinkers are now agreeing that it was used for water or tea. Tea was the drink of the masses during the Goryeo Dynasty when Celadon was most popular in Korea.  The lotus leaves surrounding the bottom indicate a strong Buddhist connection to this piece.  Buddhism and wine are not compatible. The metamorphosis of a sea creature into a dragon is a well recognized Korean theme.
Examples of Celadon or Chungja Style follow: 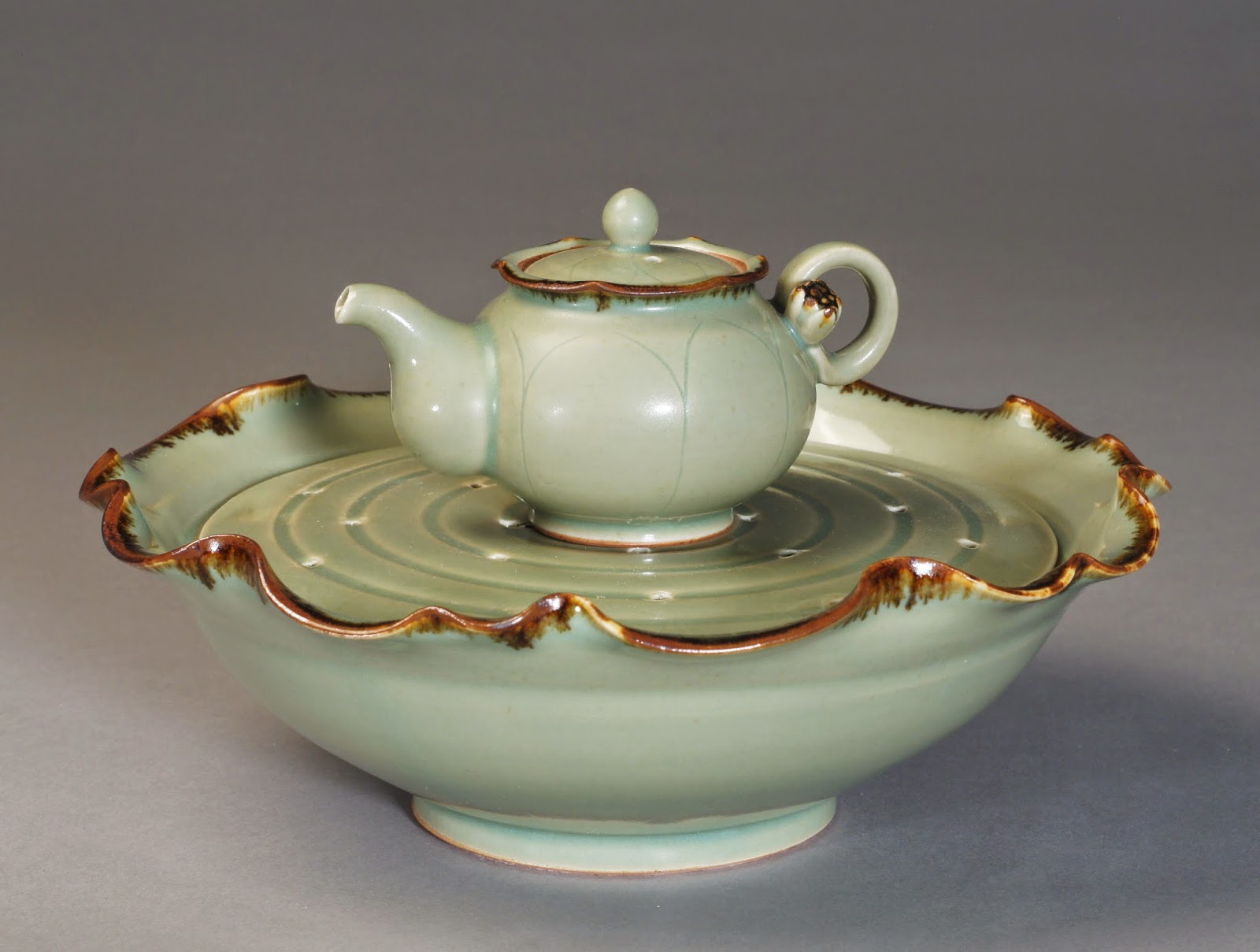 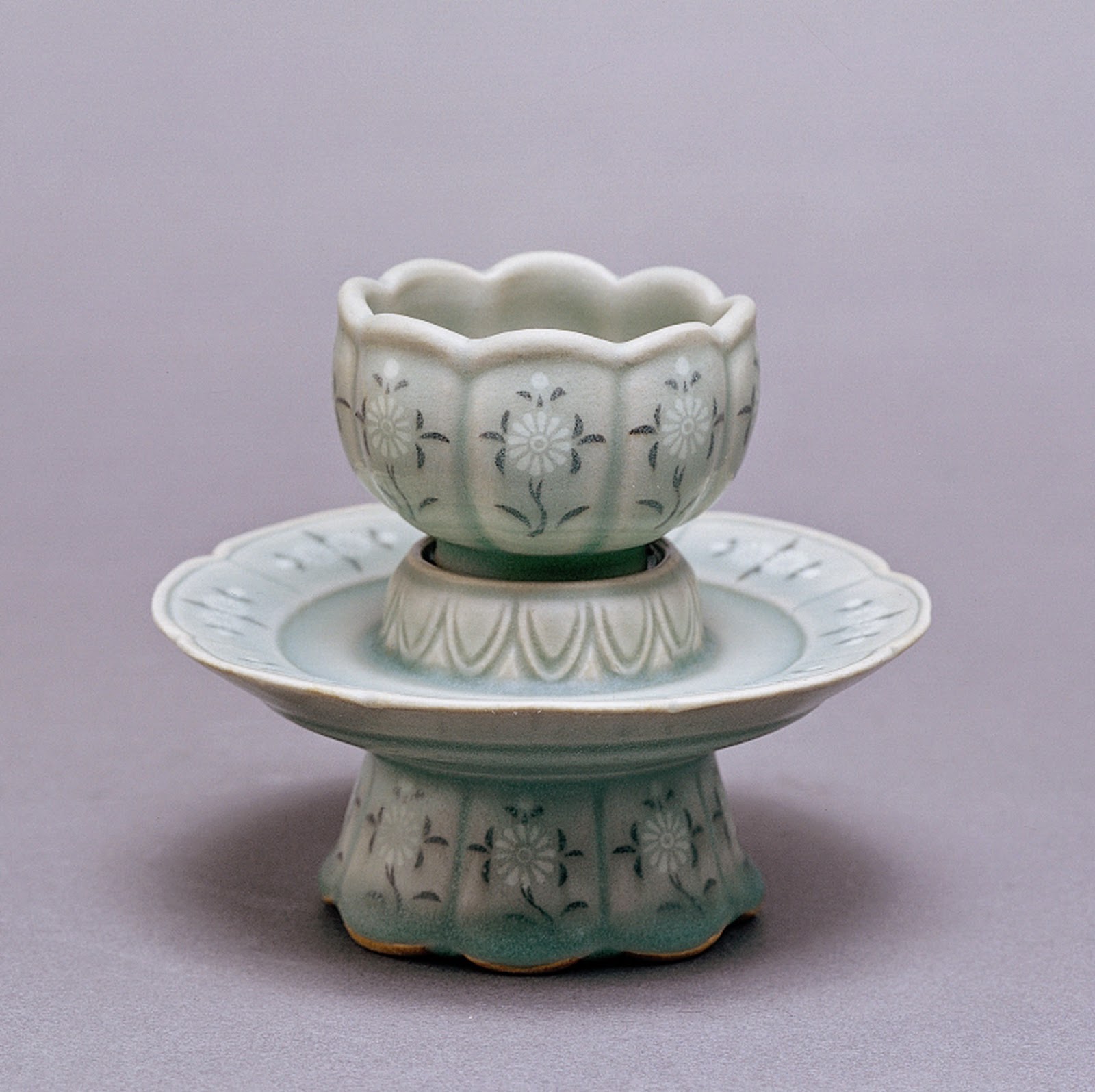 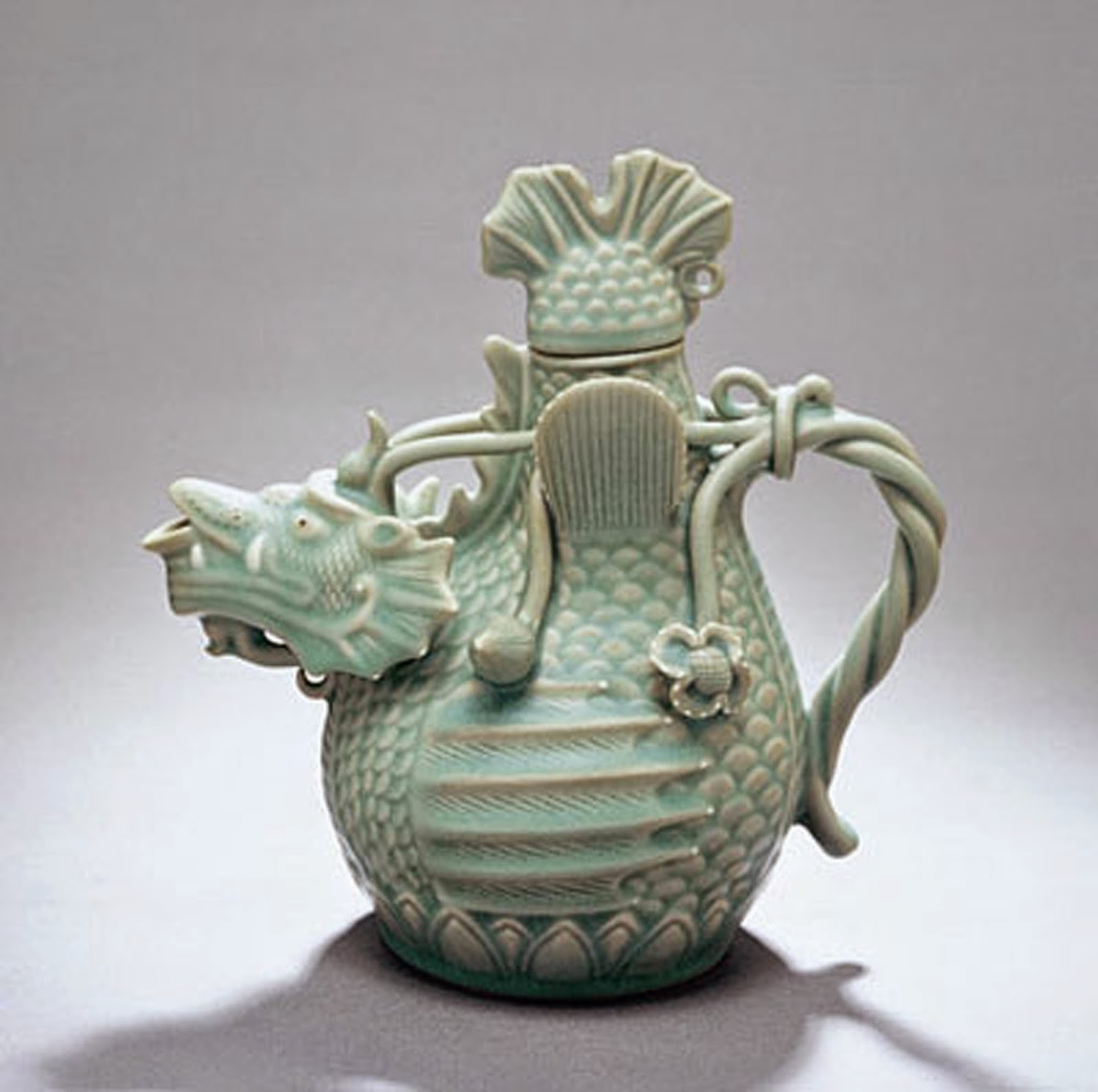 These examples are not meant to show all the possible variations of these four ceramic styles.  Rather these examples were selected to show that there is variety within each styles.
The above styles began during Korea's Three Kingdom Period and span from 57 BCE to 1392 CE.  Korea also has an earlier ceramic history when some other very interesting work was being made.  These styles touch on the periods when tea was being drunk in Korea.
Work by each of the artists represented can be acquired through us.  Contact us for details.
A Quick Look at Korean Ceramic Styles (Part 2) is available.  Part 2 includes, Buncheong, Porcelain, Stoneware and Contemporary.
Please follow me on Facebook.